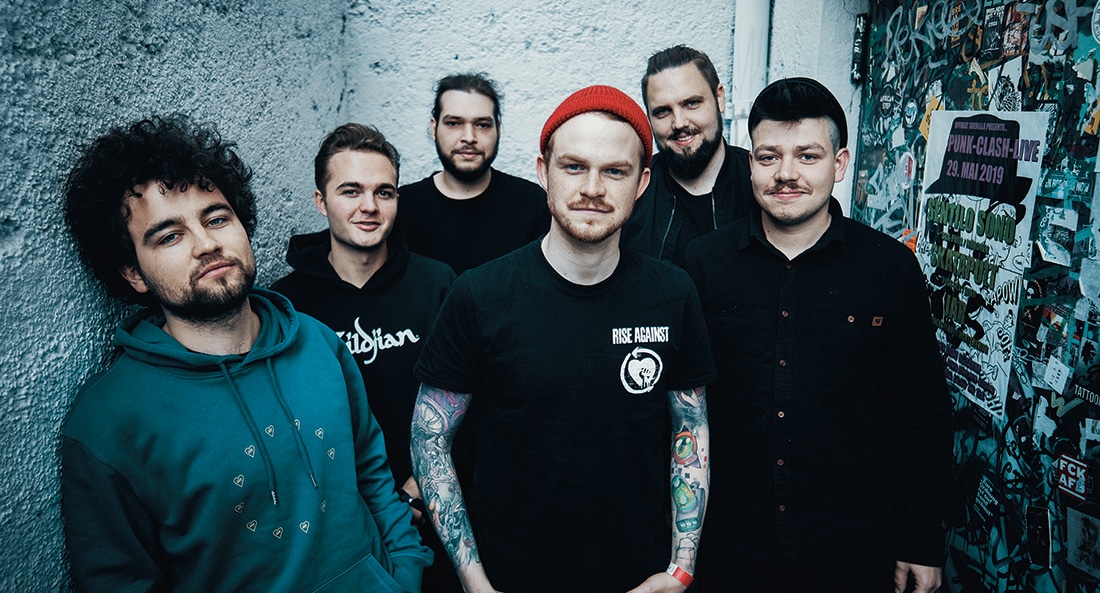 It’s never too late to go in a new direction, especially when you know it’s the right one. And as so often before these groundbreaking decisions, you wander aimlessly, torn and often broken in a world full of (im)possibilities. The new Munich band YOUTH OKAY wasn’t that hopeless and yet they were damn close. With YOUTH OKAY the will for radical renewal was still before the first band rehearsal in winter 2018. After 8 years in the music business, during which they not only gained a lot of live experience with their predecessor band “Naked Superhero” at well over 300 concerts, but also gained a respectable fan base, everything was creatively said. The 6 young Munich guys were stuck in the infamous cul-de-sac and decided without further ado to completely delete the already recorded songs for a new album and to start all over again. Without knowing where exactly this “front” is. Singer Daniel Fahrländer can’t remember exactly who gave the kick-off, but “when the “things” suddenly ran over the effect devices, it sounded weird. We freaked out in the rehearsal room.” By “things” he means the trumpet and trombone, which have always had a fixed place in the band’s construction, but which were suddenly recognizable as a unique selling point due to the alienation of the effect devices. The new sound, which YOUTH OKAY themselves call an alternative BrassFX, was born and inspired. In the midst of the euphoria of a new beginning, Daniel draws inspiration from an incident in his closest family environment: depressions that have completely turned his life around. The death of his mother a few years ago prompted him to put his innermost thoughts of recent years back on paper again and thus casually sketch the content concept for TURNS: In times of unimportant pop music and emotional superficiality, the band has something to say on their debut album, goes deep emotionally, dares to touch with painful and uncomfortable truths and takes the listeners on a journey out of their comfort zone, if not to carry them along. In a courageous way, YOUTH OKAY prove a special sense when it comes to telling stories. The result? Honest, profound, urgent and euphoric alternative – and punk anthems, cast in form by none other than Sebastian Hafner (ITCHY), who provided the band with the necessary pressure for the restart. In addition to politically and socially topical issues such as migration and environmental pollution, their focus is on dealing with personal, emotional challenges. YOUTH OKAY don’t denounce or demonize, but try to help and point out possible ways out. For the new album, they are working hand in hand with help facilities for mentally ill people and want to remove the taboo from this supposed flaw, which has meanwhile arrived in the middle of society. “You are not alone”, says the message – “there is a way out when we stand together” – the tone of the content as well as the music itself convey. And so it is sung about, even commonly conjured up, the high after an interim valley, the hope for better times and for togetherness instead of opposition. YOUTH OKAY dare the adventure and with their newly conceived alternative rock, which pulls, sweats, breathes and pulls, with these deeply convinced lyrics and brass instruments, which seem like synthesizers, put on the guaranteed right card. The first new concerts are in the starting blocks and the live-qualities will provide new possibilities for the guys in 2021 with the strong new songs and the energy of a new beginning. That’s what it’s all about: Everything is always possible. You just have to do it.